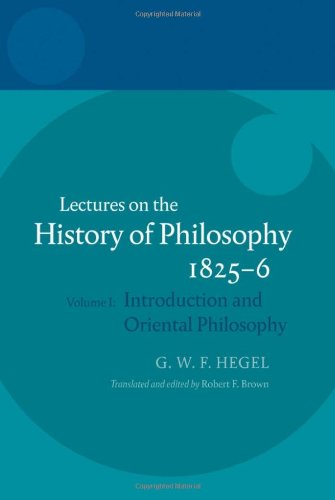 Lectures on the History of Philosophy 1825–26, Volume I: Introduction and Oriental Philosophy, Together with Introductions from the Other Series of These Lectures, by Georg Wilhelm Friedrich Hegel.  Translated by R. F. Brown and J. M. Stewart.  New York: Oxford University Press, 2009; xiv + 323 pages. ISBN: 978-019956893.

The present volume is a slightly abridged translation of Jaeschke’s critical edition of Hegel’s Vorlesungen über die Geschichte der Philosophie: Teil I. It includes a complete translation of transcripts of Hegel’s lectures on the introduction to the history of philosophy of 1819, 1825–26 and 1829–30, the manuscript fragment of 1823–24, and the transcript of Hegel’s 1825–26 account of the literature and Oriental philosophy. It also includes substantial selections from the 1820–21, 1823–24, 1827–28 and 1831 transcripts, and approximately the first two-thirds of Hegel’s 1820 manuscript.

This volume adheres to the same high standards as the rest of the works in the Hegel Lecture Series. As we have come to expect, the present text includes a lengthy editorial introduction, valuable footnotes, a translation glossary and critical index. Furthermore, the editors have compiled an extensive bibliography of Hegel’s source material for these lectures. As to the translation itself, it conforms closely to the standard translation of Hegel’s terms employed by earlier editions in the series and is as fluid and precise as one may reasonably hope.

Unlike other works in this series, the editorial introduction to the present volume has little to say about the actual content of these lectures. Instead, it focusses primarily on the various shortcomings of previous editions and translations of Hegel’s introductions to the history of philosophy, the manuscript sources of Jaeschke’s recent critical edition that serve as the basis for the present volume and the basis of various editorial decisions on the part of both the German and English editors, including the different organisation of the various lecture series. Those interested in such matters should certainly consult this quite lengthy introduction. For others less concerned with such philological details, it should be sufficient to state that the present volume renders all previous English editions of Hegel’s introduction to history of philosophy obsolete. For the first time we have in our hands an accurate account of Hegel’s presentation of this material separated by year of presentation, rather than a text that has been reordered and reworded according to the whims of the editors. The same cannot be said of either the old translation of Haldane and Simson, or even the newer translations of Lauer, Miller and Knox, based respectively on the highly problematic Mitchelet and Hoffmeister editions of these lectures.

Undoubtedly, some will be disappointed to hear that Brown and Stewart chose to provide only selections from some of the lectures that appear unexpurgated in the German edition of this text. This disadvantage, however, is somewhat offset by the fact that the English edition includes not only the complete 1825–26 lectures, but also the full text of both the earliest and latest extant lectures (excluding the 1831 lectures, which were cut short after only the first lecture due to Hegel’s death). Furthermore, the material from the remaining lectures and manuscripts are substantially represented, with the translators focussing particularly on passages where Hegel deviates from his earlier presentation or expands on points only touched upon in the other lectures. Indeed, Brown and Stewart have, if anything, erred on the side of caution by excerpting and translating more than half of the material present in the German edition. Furthermore, any omissions have been scrupulously documented and the omitted material is both clearly indicated and summarised by the translators, who often point to other translated lectures where Hegel makes the same or similar arguments. Moreover, in the abridged lectures, the translators have inserted the German pagination directly into the text, rather than placing it in the margins, and the page numbers of the German passages omitted in the English edition are clearly indicated in the translators’ summaries. While perhaps not ideal, the text is certainly still usable for serious research in English, while those deeply interested in the most subtle of changes in Hegel’s presentation would at any rate presumably consult the German text directly.

A word now on the content of this volume. Part of the value of having Hegel’s lectures given according to their year of presentation is that this enables us to trace the development of Hegel’s treatment of a subject. This was quite clearly one of the reasons for the enormous interest in and outpouring of secondary literature following the publication of The Hegel Lecture Series’ edition of Hegel’s Lectures on the Philosophy of Religion. Yet, while Hegel only began to lecture on the philosophy of religion late in his career with his arrival in Berlin, he lectured on the history of philosophy both in Jena from 1805–06 and twice in Heidelberg, from 1816–17 and 1817–18. Unfortunately, transcripts and manuscripts from these earlier lectures have been lost. According to the editorial introduction, by the time that Hegel delivered the lectures in Berlin, the only ones we have access to today, Hegel’s treatment of the history of philosophy had already solidified so that “[t]he conceptual basis remained unchanged in all the Berlin introductions.” (9) Regardless of whether scholars will ultimately agree with this assessment, it is certainly true that while there was clearly a developmental story to be told with respect to the Lectures on the Philosophy of Religion, it is difficult to construct any such developmental narrative for Hegel’s treatment of the history of philosophy. Granted, Hegel’s introductions to the history of philosophy were far more varied than were his actual accounts of that history itself, which is why both the German and English editors of Greek Religion and Medieval and Modern Philosophy judged the 1825–26 lectures on this material to be “capable of standing as a mature representation of the whole” (4) but decided to provide multiple versions of Hegel’s introductions. Despite greater variation in presentation, however, this seems to be more a matter of changes in emphasis rather than of changes and developments in Hegel’s outlook or conception of the subject.

To point to the elephant in the room, there is no developmental story to be told that will explain away Hegel’s troublesome claim that the history of philosophy in some sense parallels his Logic, for Hegel quite clearly makes this claim both in 1820–21 and again in 1829–30. This is not to say that the variations between Hegel’s lectures are unenlighten­ing, for even if there is no developmental story to be told, the clarity of this text and Hegel’s various treatments of the themes will prove useful. With Hegel, after all, nothing is less repetitious than repetition. Those already familiar with the previous editions of these introductions, however, will find little here that is absolutely new or unexpected. What they will find is a reliable translation that serves as a firm basis on which to consider such perplexing pronouncements. Perhaps this is actually an advantage, for such riddles that remain cannot be neutralised through a genetic historicising account. Hegel, in fact, held such historicising in contempt insofar as it degraded the history of philosophy to the level of a trivial and external concern with dead people and their dead opinions. (62–63) His lectures on the history of philosophy, by contrast, were revolutionary precisely because they took the history of philosophy itself as a live and genuine object of philosophical research and investigation, and indeed the very crown of his system. Regardless of one’s own stance on Hegel’s system and his evolutionary account of the history of philosophy, it is, as the translators of the present volume remark, “a tribute to the power of Hegel’s innovative perspective on this history that we (non-Hegelians included) have come to take so many of its elements for granted.” (2)—hence, the enduring philosophical import of these lectures and the immense value of the present translation.