Chloë Taylor, The Culture of Confession from Augustine to Foucault 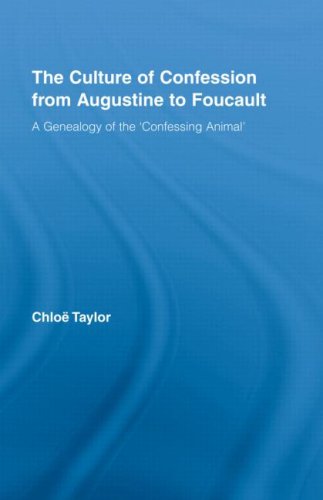 Review by Joseph J. Tanke, California College of the Arts. Published in Symposium 14:1 (2010).

Chloë Taylor’s The Culture of Confession from Augustine to Foucault: A Genealogy of the “Confessing Animal” is an engaging work of Foucaultian scholarship that does not content itself with a simple reconstruction of Foucault’s thought, but instead develops and challenges it.  Taylor’s book offers a genealogical analysis of the cultural mechanisms and rituals by which the subject seeks to articulate the truth about itself, a practice that was central to the genealogy of sexuality Foucault was conducting from the mid-1970s until the end of his life.  In part, Taylor’s work serves to fill out the critique of confessional subjectivity announced most forcefully in Foucault’s The History of Sexuality: An Introduction, and she follows some of his lesser-known writings and lectures to outline the series of accidents through which we in the West have come to believe it imperative to work out the innermost truth of our being verbally in the presence of another. The practice is, however, given expanded meaning by Taylor’s erudite analyses of psychoanalysis, literature and film, with the work situated nicely at the intersections of philosophy, literary theory and debates within contemporary feminism.  The reader will quickly be convinced of the importance of this research which seeks to empower those who have been marginalised upon the basis of an identity—confessed or not.

As Foucault explained, the purpose of any genealogy is not to confirm what is known, but to open cracks within a configuration of the present so that life might be lived differently.  In this sense, Taylor takes exception with writers who view confession as the expression of an innate human desire.  Indeed, one of the virtues of her genealogy’s opening pages is that it shows how the practice, initially quite marginal in ancient philosophical schools and the Christian faith, becomes an obligation only amidst a certain amount of struggle and resistance.  The early events in Taylor’s story will be familiar to Foucault’s readers who have been working out the implications of his thought for theology and church history for a number of years, so I will not recount them here.  It is worth mentioning, however, that Taylor’s presentation is quite economical, offering a straightforward account of what is, in Foucault’s corpus, fragmentary.  On this note, however, I find unsubstantiated Taylor’s claim that the manuscript for the fourth volume of the History of Sexuality, Les Aveux de la chair, was destroyed upon his death.  Since its contents and destiny are subject to so much speculation, it would be helpful to have more evidence for this.

Taylor’s work raises several interesting questions beyond the purview of the traditional Foucaultian lens.  In the first instance, she brings together Foucault’s genealogies of the various relationships between the subject and truth with the discourses on confession generated by practitioners of deconstruction.  Through Paul de Man’s reading of Rousseau, and Derrida’s readings of de Man, she problematises our notion of truth to ask about the status of false confessions.  These discussions bring epistemological complexity to a Foucault who is very skilled at performing readings of institutions, historical arrangements and practices, but perhaps not attentive enough to actual confessions.  With readings of Freud, Dostoyevsky’s Notes from Underground, and novelist Annie Ernaux, Taylor challenges Foucault’s assessment that the act of confessing might, for some, be pleasurable.  Confession, she argues, appears to offer cathartic release, but quickly becomes an insatiable and ultimately pernicious habit.  Ernaux is an important figure in contemporary France, and Taylor renders anglophone readers an important service by commenting on her writings in a philosophical context.  More importantly, the discussions of Ernaux’s autobiographical presentations of sex, love, pain and abortion well illustrate the need for attention to sexual difference when analysing the power dynamics of confession.  In general, Taylor thinks these dynamics in ever more subtle terms, focussing attention—somewhat against the grain of Foucault’s thought—on both sides of the confessor-confessed relationship.  This analysis of the intersubjective dimensions of confession can be viewed as an expansion of Foucaultian ethics, and an argument “against the tendency to elicit the confessions of others and to confess for others.” (190)

It will be interesting to see Taylor respond to the picture that is emerging with the publication of Foucault’s lecture courses.  As is well known, Foucault’s thought is often parsed according to three axes: power, knowledge and subjectivity.  Taylor tells largely the story of the development of the latter two, and as such usually describes imperatives to confession and the confessional relationship in terms of surveillance and discipline.  One wonders, however, if this story is separable from Foucault’s analysis of different forms of power, with governance, pastoral power, psychiatric power, discipline and biopower corresponding to different eras, forms and uses of confession.  Would it be possible to show that different forms of power are operative in the same confessional space?  Modern confessions of a sexual nature, for example, rely on a hermeneutics of the self developed in ancient schools of philosophy and the monastery, instill forms of self-relation approximating discipline, and belong to biopolitical networks in which the individual is considered a member of a population with its law of averages.  Clarifying the sources and strategies of power will enable us to target more effectively the discourses, practices and institutions that facilitate their transmission, and may help us to decide upon forms of resistance.

A large portion of Taylor’s thinking is devoted to seeking out alternatives to confession’s form of subjection.  One chapter contains a dialectical reading of Foucault’s critique of psychoanalysis and the various forms of post-Freudian analysis—schizoanalysis, feminist versions of psychotherapy, and efforts to decolonise the mind à la Fanon—that may avoid a normalising infrastructure.  Taylor’s discussion of Bertha Pappenheim (Freud’s Anna O.) demonstrates the risks inherent in the analyst-analysand relationship, and, more importantly, the need for psychic healing to be connected with social and political agency.  Taylor’s analysis of works by Artemisia Gentileschi attest to the unique powers of art to communicate protest without necessarily confessing, while beginning to address the absence of women from discussions of self-fashioning. Her call to interpret Foucault’s works as huponmnēmata, or exercises in writing and rewriting the self, will not meet with much protest, for it is conventional wisdom that his genealogies should be judged in terms of their efficacy.  More problematic, however, is the attempt to read the memoirs of Herculine Barbin and Pierre Rivière as alternatives, successful or not, to confession.  While at the level of the text both authors might resist putting the truth of their desires into words, both endured countless humiliations and ended as suicides.  I have always seen Foucault’s publication of both documents as his attempt to illustrate the consequences for individual existences of new forms of power/knowledge.

Perhaps parrhēsia (frank speech), as it is explored in Foucault’s last three courses, will be a resource for thinking about the shifting relationships between power and resistance within the truth-subject dyad.  This modality of truth-speaking first presented itself to Foucault in his analysis of relationships of guidance, in Hellenistic philosophy, and practices of confession, in early Christianity.  In the Hermeneutics of the Subject, he explains how parrhēsia moved from being a desirable quality in a philosophical master, i.e., the ability to give unpleasant advice to someone in need, to an obligatory state of openness whereby the subject of the enunciation also becomes the referent of the discourse.  Foucault thought that this transition occurred within Epicurean communities, where the correction of faults was part of philosophical practice.  As Foucault put it: “It seems to me that it is the first time that we find this obligation that we will meet again in Christianity, namely: I must respond…to the words of truth that teach me the truth and consequently help me in my salvation, with a discourse of truth by which I open the truth of my own soul…to others.” (391)  Given parrhēsia’s long political history, however, where it at times functions as a mode of criticism, it seems as though its rehabilitation will allow us to alleviate and reverse the burden of speaking about ourselves and instead engage in acts of social-political criticism.

One can only hope that Taylor will continue with this vitally important research, to increase both our understanding of Foucault as well as our resources for changing the practices built into our history.  It would be interesting to see her analyse more popular manifestations of the confessional mechanism, for her references to contemporary literature, television talk shows, the self-help genre and legal cases are rich.  To what degree do new media technologies such as MySpace and Twitter create, fulfil and/or frustrate our desires to broadcast secrets?  Are those scenes on MTV’s “Real World,” where participants deliver soliloquies in a darkened space, the contemporary equivalent of the confessional box?